What Kind of Neighbor is Senator Hillary Clinton?

To answer that, first we should know something about where she lives. This "puff piece" from the London Daily Telegraph describes her Washington home in glowing, anticipatory terms:

The Neo-Georgian mansion in Washington is officially called Whitehaven, but it is already known by irreverent Democrats as the "White-House-in-Waiting"...The house will be Mrs Clinton's stage from which she will amass a war chest for her Senate re-election campaign next year and a likely White House bid in 2008...

Mrs Clinton also regularly hosts fund-raisers for other prominent Democrats..."It is an invaluable political tool for Mrs Clinton to invite people into the intimate personal environment of her own home..."

Mrs Clinton lives in the house during the week when the Senate is sitting...The consummate host, Mrs Clinton greets each visitor, shaking hands and posing for photographs.

It's a pretty house, isn't it? Yet I do not think this story ran in U.S. newspapers. This is a matter of courtesy in Washington, D.C.: the addresses of our political celebrities are unlisted and reporters don't publicize them. That allows politicians of all stripes to keep a private life and ensures that journalists don't offend important sources.

Now, if you please, click on THIS link to a Google satellite picture, zoom in, and examine it carefully.

Remember the "Support Denmark" demonstration across from the Danish Embassy last week? The entrance to the Danish Embassy is marked with the letter "B". Less than fifty feet away is a square three-dormer-per-side Georgian house, the only one of its kind on the block.

If you still have any doubts, just examine the background of 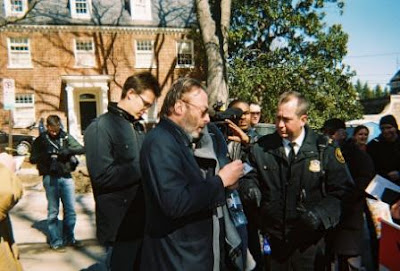 this photograph of the demonstration.

Yes, Senator Hillary Clinton lives directly across the street from the Danish Embassy! All she had to do was step outside and she could have led the demo herself. Imagine the impact of such a statement: Senator Clinton "spontaneous" and unprompted, joining a demonstration in support of a free-press democracy beleagered by insulted Muslims throughout the world! What a brave thing to do! What an expression of moral courage!

With such a celebrity at its head, the demonstration would have been broadcast worldwide rather than the tapes being filed. She would have immediately garnered the loyalty of all Americans who feel threatened by Islamofascism, cutting Americans' support for President Bush and the Republican Party dramatically. Yet she did not do so. Was that a matter of choice, the busy Senator's schedule, or was it something else?

True, the demonstration was held on short notice. Perhaps the Senator was travelling? But in that case she certainly could have sent someone as her personal representative.

Not for a moment do I believe that the Senator was unaware of the upcoming demonstration. As ex-First Lady, she is entitled to as much Secret Service protection as she wishes. The Uniformed Division of the Secret Service is responsible for guarding embassies and anticipating such demonstrations. I can believe other government agencies may be incompetent, but derogatory jokes about the Secret Service ceased on that day in 1981 when Americans witnessed Secret Service bodyguards leaping into a fusillade of bullets to protect their President.

Why did Senator Clinton ignore the demonstration taking place in her own yard? (Look, she even pulled the blinds!) Why, in fact, has she been almost entirely silent on the Cartoon War front? The answer, I believe, lies in Hillary Clinton's convictions or lack thereof. She is silent because she is tasting the wind. Few Americans know what she stands for nowadays, but many are smitten by her glamour. Her ideals and native political initiative were completely expended by the end of her years as First Lady. All that remains is an enduring desire to experience once again those "glory days". Hillary thus seeks political advantage only and as she is uncertain whether supporting the Danes will be a plus, she has taken a low-key approach to this matter.

What does this have to do with what kind of neighbor Senator Clinton is? I also used to live next door to diplomats. They were also representatives of a democratic nation not one American in ten had ever heard of, and not one American in a hundred could point out on a map.

Yet whenever this country was mentioned in my presence, I leaped in to explain and defend it. Because every American is an ambassador of sorts. And because that is the sort of thing good neighbors do.

Two articles covering a prior (Feb. 18th) protest-with-opposing-rally mention the Hillary-Danish Embassy connection: at The Redhunter and Free Republic. Pics of that event here. Michelle Malkin was also there.
Posted by Solomon2 at 2:26 PM