Today is a terrible day in the annals of human freedom. Egypt, a country of
eighty million people, is engaged in a quickie referendum to approve constitutional amendments that vastly restrict the ability of its people to associate, organize, and communicate, while granting the police independence from public accountability. The amendments were pushed through the sham parliament only last week. Egypt's government has thus crossed the line from corrupt authoritarian republic to official oligarchic tyranny.

Egyptians are becoming slaves or serfs. And there is no promised land for them to escape to!

Not everyone in Egypt took this lying down. The Sandmonkey described how pro-democracy protestors were arrested - more accurately, abducted - yesterday. And today Solomon2 stood together in solidarity with a small group of people to demonstrate outside the Egyptian embassy in Washington, D.C.

By coincidence I met with two of the female demonstrators while walking from the Metro to the embassy. I think one of them was Nora Yunis of the aptly-named GoodbyeMubarak.com.

I introduced myself as an American. They said my presence would be very important. I had to laugh a little at this vast exaggeration of my influence!

The embassy itself has twin-window architecture that one of the girls said reminded her of the ancient temples. As we approached I studied the building carefully. "Yes, have you been there?"

"It's a good place to visit in the winter."

Seen from the front, the marble gate of the embassy is tall and looks substantial. But behind it is mostly empty air, a low roof from the gate to the glass entrance spanning the driveway, providing a little cover to officials as they go in and out.

How stereotypically Egyptian, I thought: a large useless edifice for the sole purpose of impressing the weak-minded with the power of the ruler, yet with little substance to support it. Its most important function is to cloud men's minds, the same way Western banks are sometimes made to look like Roman temples: to give people the illusion of permanence and security, when in reality your money has been loaned elsewhere! 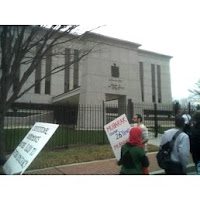 Us demonstrators showed up pretty close to eleven o'clock, as planned. Unlike the "S.S." in Egypt, the Uniform Division of the Secret Service is elaborately polite. At the very beginning of the demonstration an officer spoke with the organizer and negotiated an excellent location where the demo would take place: an eight-foot wide strip between the security barrier and the curb directly in front of the embassy.

The demonstrators employed a photographer, and one or two U.S. reporters also showed up, but nobody from the MSM. As far as I know, I was the only non-Egyptian American actually marching with the protestors. I had never met any of the protestors before.

"Give Mubarak a Visa and Take Him Condoleeza!"

That was the only slogan in English, I think, but I couldn't bring myself to utter it; give us your tired and your poor, but I don't want the likes of Mubarak here! Still, it was the most popular and energizing chant. As I can't understand Arabic, I stayed mostly silent.

We marched back and forth in our little area in front of the embassy. Luckily they let me borrow their signs. Oddly enough, the more people marched and chanted, the happier they became. I was most proud to carry the "Freedom for Bloggers" and "Free Abdul Karim" posters - but of course, that was selfish of me. More important were the signs carefully citing the constitutional amendments that will restrict Egyptian freedoms: "Article 76", "Article 88", and "President for Life!". I even carried a sign citing Amnesty International's criticism of the Mubarak regime.

Around 11:30am the ambassador's car, which had been waiting out front, left the embassy compound with a single male occupant in the rear seat. We made sure to flash our signs at him.

Some of the embassy staff stood just inside the glass entrance to stare at us. At times I stopped marching to allow my sign and I to stare directly back. The first staffer retreated under my glare; later ones were more defiant.

The highlight of the demonstration was when we read and presented a letter of protest to the Egyptian ambassador. The police officer we negotiated with offerred to help deliver it. I held one of the signs flat to make a "table" so everyone could sign the letter more easily. "This is American support for democracy!" I quipped.

The reporter then fished for a quote from me: "I hate to see a democracy slide into tyranny." I left soon after that.

Was it a funeral or a coming-out party? Neither one, I guess. People were still sad, but by coming together the world seemed a little brighter. A light illuminating the darkness descending upon Egypt.

Passover starts next week. Darkness was the ninth plague. The tenth plague was the death of the Egyptian first-born. Let's work to make sure history doesn't repeat itself once more.
Posted by Solomon2 at 2:30 PM