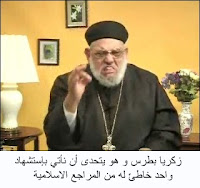 Why does Father Zakaria Botros rate such a title? Because (1) he is a fearless television personality, (2) he speaks in fluent classical Arabic, and (3) he has proved to be both irrefutable and irresistible. Thus he has changed the dynamic by making Islamic scholars accountable:

The most dramatic example of this occurred on another famous show on the international station, Iqra. The host, Basma — a conservative Muslim woman in full hijab — asked two prominent ulema, including Sheikh Gamal Qutb, one-time grand mufti of al-Azhar University, to explain the legality of the Koranic verse (4:24) that permits men to freely copulate with captive women. She repeatedly asked: “According to sharia, is slave-sex still applicable?” The two ulema would give no clear answer — dissembling here, going off on tangents there. Basma remained adamant: Muslim youth were confused, and needed a response, since “there is a certain channel and a certain man who has discussed this issue over twenty times and has received no response from you.”

The flustered Sheikh Qutb roared, “low-life people like that must be totally ignored!” and stormed off the set.

Botros’s motive is not to incite the West against Islam, promote “Israeli interests,” or “demonize” Muslims, but to draw Muslims away from the dead legalism of sharia to the spirituality of Christianity. Many Western critics fail to appreciate that, to disempower radical Islam, something theocentric and spiritually satisfying — not secularism, democracy, capitalism, materialism, feminism, etc. — must be offered in its place. The truths of one religion can only be challenged and supplanted by the truths of another. And so Father Zakaria Botros has been fighting fire with fire. Radical Islam - that is, total sharia law - cannot withstand these arguments. That is enough to explain why its proponents advocate and employ violence to achieve their ends - and why the rest of us must retain the will and means to employ violence, as well as our voices, to oppose them. As George Orwell put it:

“Good people sleep peaceably in their beds at night only because rough men stand ready to do violence on their behalf.”

Nowhere is this more true than in parts of the world threatened by Al Qaeda. The latest post on Michael Totten's blog, The Liberation of Karmah, Part I shows the amazement of U.S. officials at the growing normalcy

and quotes a U.S. marine on the Iraqi experience:

- they had no choice but to submit to them. Otherwise they would end up like their family members with their heads chopped off. If you didn't support Al Qaeda they would blow up your house.”

The unprompted opinion of one of the locals, upon spotting a suspicious character, was even more revealing:

Al Qaeda. That’s their uniform, you know, that beard and that high-cut dishdasha. God, what pieces of shit those fuckers are.”

Yes, God knows. So do the Iraqis. Father Zak isn't "Islam's Public Enemy #1", but represents the hope millions of Muslims have to be free of the forces of radicalism by challenging the learned ulema to either match the humanity of modest Muslims and other religions, or retreat into silence as their flock travels elsewhere.
Posted by Solomon2 at 12:57 PM No comments: Links to this post